If you spend any length of time in the nonprofit world, sooner or later you’ll be faced with the need to raise a large sum of money in a short amount of time.

How do you pull together a successful fundraising campaign quickly, especially given the pressure you’re under and the stress you’re feeling?

Recently I had the honor of working with Harmony House, an organization that serves victims of domestic violence in Springfield, Missouri.

Because their existing building was old and out-of-date, Harmony House was tragically having to turn away hundreds of women and children each year who desperately needed help. The organization’s leaders determined that $5 million dollars must be raised to build a new shelter and headquarters.

That’s when they turned to Global Advisory Associates for ideas on developing an effective fundraising campaign. After meeting with Harmony House leadership, I interviewed business and community leaders throughout the Springfield community. This research uncovered three core issues that must be addressed if Harmony House were to be successful:

So what was the best way to address these challenges?

I’ve spent many decades in the nonprofit world, serving as Executive Vice President for Enactus, CEO of Junior Achievement offices throughout the United States, and President of the Greater Los Angeles Zoo Association.

These experiences have taught me four key principles of effective fundraising.

These principles helped Harmony House to address the issues they were facing as they raised the funds they need for that new building.

#1: People Give to People

Would you hand over a large sum of money to someone you don’t trust? Or don’t even know?

If you’re the one who needs to raise money, keep these questions at the forefront of your mind as you approach potential donors. You must first establish the relationship. Earn the person’s trust. Then ask for the contribution. In that order.

For Harmony House, this is why it was so critical for them to build awareness in the broader community and to recruit the right people to serve on their board.

And who are the right people? Remember, your board has a fiduciary responsibility to the organization. You need board members who have established a reputation for leadership in the community, and who already have cultivated a treasure-trove of relationships with influential potential donors.

When you have those connections already in place, you’ll find it’s much easier to reach out for help when you need it most. You can learn even more about this in my favorite book on the subject, Relationship Fundraising by Ken Burnett.

#2: People Give to Success 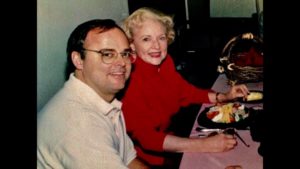 I had brown hair. Fundraising over the years turned it gray.

Donors want to be part of the solution, not the problem.

This is why leading with the Big Gift was identified as a top priority for Harmony House, and once that gift was secured, other gifts of significance started coming into the organization. At that point, they knew the campaign was going to be a success.

A few blogs ago I told the story of how Betty White generously donated the first $100,000 dollars towards an emergency fundraising campaign, back when I was President of the Greater Los Angeles Zoo Association. Why was this a big deal?

Because once that first Big Gift came in, it gave the campaign an air of success.

All of a sudden, our ultimate goal of raising a quarter of a million dollars became attainable. All of a sudden, donors who might otherwise have been on the fence were a little more enthusiastic about opening up their wallets.

More recently, when I was working for Enactus, we secured a million dollar gift from HSBC to support a global financial literacy initiative, after 1 ½ years of building relationships with key officials in the company.

But a funny thing happened after the HSBC gift. We started seeing increased support from other major companies, such as Walmart, KPMG, Unilever, Coca Cola, and Campbell’s. You see, success attracts success. Once that first Big Gift comes in, other Big Givers are more likely to take note and join in supporting your cause.

#3: People Give for Their Reasons, Not Yours

A few years ago, when I first met with HSBC’s key decision maker in London, I sat down with the intention of requesting a $50,000 contribution for Enactus.

But before I could even ask for the money, Dame Mary Richardson, President of the HSBC Education Trust, expressed the desire to launch a worldwide financial literacy project — a substantial initiative which would cost well over a million dollars. In other words, I had arrived at the meeting with my interests in mind, but the donor had her own reasons for wanting to give.

Think about your own charitable contributions over the years. Why did you write those checks?

Just for the tax write-off, you say? But, with all of the charities out there asking for your money, you could have just randomly drawn a few out of a hat and accomplished that.

What was it about the ones you gave to that made you select them and not somebody else?

What all of these reasons have in common is that they involve some personal connection to the issue, organization, or someone you know.

Most people — especially high net worth individuals — get lots of solicitations for money in support of one cause or another.

The key to effective fundraising here, for Harmony House as well as your organization, is to identify your best donor prospects, not just based on ability to give, but on their reasons for giving to your particular cause over something else.

There’s another important thing to remember about that HSBC gift to Enactus: it was quite a long and winding process.

From my initial encounter with one of their representatives at a conference in Frankfurt, Germany, to the day we received that first million dollar check, there were meetings with three key individuals, on three different continents, and 1 ½ years in between.

There was a lengthy proposal followed by 6 months with no response.

After that 6 month wait, I was invited to meet the company’s head of investment banking in New York. During this meeting, he committed to donating $1 million per year for the next 3 years, and I pledged to launch the program by January 1, less than one month later.

In March of the following year — after the program had launched, and 1 ½ years after that initial encounter in Frankfurt — we finally received that first $1 million check. After that, the grant got renewed and Enactus continued receiving $1 million checks from HSBC for the next 5 years.

The moral of the story is that the fundraising process takes time.

So instead of thinking of fundraising as a one-shot deal, approach it as an ongoing function of your organization, with continuous efforts to refine and improve the process.

Thanks to these four principles, Harmony House has now raised all of the funds they needed for their new building and now has a maintenance fund to cover future repairs.

If you’re looking for ideas for boosting your own fundraising success, contact Global Advisory Associates at any time.

I look forward to helping you acquire the resources you need to accomplish the important work you do for your community.